Quote:
I have no idea, sorry Excessum....

More traditional Japanese toys, I just had to post these, having seen them in Samurai X, and in other films.

Japanese boys also like playing with tops and kites. Tops, or Koma, spun either by hand or with a string, came to Japan about a thousand years ago from China. During the Edo period (1603-1868), a competitive game with tops became popular. Using a string, players spun small wooden or steel tops called bei-goma inside a ring, usually a bucket covered with a towel, and tried to knock their opponents' tops out of bounds. Over the years, many different kinds of tops have been created in Japan, including tops that make noise and tops that spin extra fast.

Oh, so that was how beyblading was formed..

thx for the info, Kanji-Kun! the pictures of deathnote figures were incredible, too!

No problem Nard-kun, now for the traditional girl toy:

Japanese girls have their own favorite traditional toys and games. One popular game that has been around for a long time is hanetsuki, which resembles badminton but uses no net. The shuttlecock is made from a seed with feathers attached, and the paddle, called a hagoita, is rectangular and made of wood.

Hanetsuki dates back over 500 years. The paddles are decorated with various images, sometimes executed in relief: girls in kimonos, Kabuki actors, and so on. While kids still like to play hanetsuki, many people simply enjoy collecting the paddles for their decorative value.

Is it possible for you to elaborate more on this.. hanetsuki game?
Well, if u don't mind, that is.. ^^ Because I don't get how they can play without a net :P


There's no such thing as happy endings, for when you find true love, happiness is everlasting.

Sure Nard-kun, they use the decorated paddles.

Hanetsuki, played with a rectangular wooden paddle, called a hagoita, and a brightly-coloured shuttlecock. Often played by girls at the New Year, the game can be played in two fashions, by one person attempting to keep the shuttlecock aloft as long as possible, or by the two people batting it back and forth.

Girls who fail to hit the shuttlecock get marked on the face with india ink. Traditionally, the longer the shuttlecock remains in the air, the greater protection from mosquitoes the players will receive during the coming year. Although Hanetsuki is not as popular as it used to be, decorative hagoita are commonly sold throughout Japan.

If that wasn't detailed enough, i don't know what is, lol!

Other examples of Japanese action figures: An actual lifesize action figure of a Japanese schoolgirl.

Since Kanji has already provided ample illustrations prior to Japanese traditional toys, I shall set the balance straight by executing examples of the modern ones.

Behold the ever-memorable digivices! Bet it makes you reminisce on the old days, huh?
The games(digivices included) and action figures were created by Bandai, a world wide toy company which originated from Japan. These digimon virtual pets were first released in 1997. 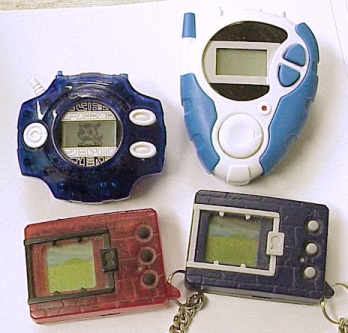 No doubt, one of the most popular games in Japan and the world today - Final Fantasy, created by Square Enix, a merge of three companies: the primary Square Enix Co., Ltd. based in Tokyo, Japan, with subsidaries Square Enix Inc. in Los Angeles, CA and Seattle, Wa and Square Enix Ltd. in London, England. Square Enix is responsible for video games such as the famous Final Fantasy Series(1987), Secret of Mana, Chrono Trigger, and many others.
This image was taken from a clip in Final Fantasy IV.

The Game Boy was invented by Gunpei Yokoi and released in Japan in 1989. It's the most succesful hand held machine ever and has sold in over 60 million copies.

P.S. Can I ask someone to post the first/oldest Japanese action figure ever made? I can't seem to locate the latter anywhere.. =(

Sorry Coolnard, I had no luck searching either...

I guess one thing to try would be to look for the first Japanese action figure MAKING company, and go from there. So instead, I am going to post up more lovely little Japanese toys!!!

No problem, rikku ^_^
In any case, thx for the effort.


There's no such thing as happy endings, for when you find true love, happiness is everlasting.

Sorry to double post, I just had to revive this thread.. :

Can anyone please tell me where i can find an image of the oldest/first ever made japanese/anime action figure??!! >_<" or better yet, post them/it up?

obtw, does anyone know who/which company sponsored the production of the deathnote action figures? And who/which company actually produced them? Of course, I could find out for myself.., but I believe this is kanji-kun's field of specialty, not that I'm restricting it only to him.., lol..