I've been hooked on this ever since my friend brought along a few bottles with her during her last visit to Canada.

Goes great with pretty much anything!

I think I'll bring back a carton during my next visit to Japan.

Anyone else hooked on it?

For a while it was a huge hit and you would see it literally fly off the shelves within minutes of it being stocked. Now it has settled down and you can find it everywhere.

We are pretty big fans... But not of the most popular brand. It is kind of cheapy tasting.
I am kind of embarrassed to admit we bought a big pack of several different brands to compare them back when it was hard to get.

I tried the S&B as well as the Momoya.

Which brand did you eventually settle on? I have a friend arriving in less than 2 weeks. I'll get her to bring me a bottle.

Momoya and S&B taste pretty much the same to me. S&B has some neat mixed versions though. Italian for example... Their ラー油 base sauces are okay too. But both the basic brands taste too cheapy for some reason.

Our household favorite would be this brand; 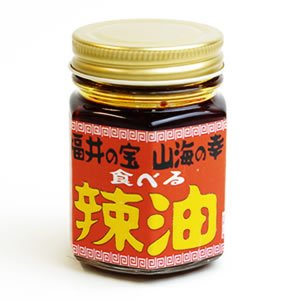 It is great for eating alone, for mixing with raw egg, for making sauces, etc. I made some really wonderful raw cheese spread using it. Seriously the very best. A bit pricier than the basic Momoya and S&B, but totally worth it.

My husband also likes this one;
http://thumbnail.image.rakuten.co.jp...00x300&s=2&r=1
It is supposedly good over rice and in お茶漬け, but I don't really like it. A bit too spicy for my taste, and too fishy to use in anything that would tone down the spice.

Another favorite of mine is this one;
http://img.yaplog.jp/img/02/pc/m/e/t...l/11/11388.jpg
It tends to be pretty expensive, but I love it. It is definitely not for plonking on top of rice though. It uses 山椒 as a base instead of 唐辛子 so has a completely different flavor than the others. I have found it really REALLY good when dribbled on steak...

One I found absolutely awful; 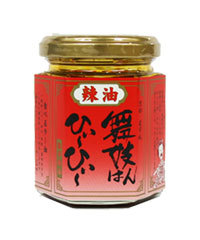 It is as if they totally missed the whole idea of *食べる*ラー油. It is seriously hot. It is hotter than normal ラー油. We were deceived by the fact that it has 食べるラー油 written on it... My husband about died when he scooped a spoonful of it on his rice and then took a bite.
Avoid it unless you want regular very hot ラー油.

We have bought and tried several other brands, but I can't come up with them off the top of my head at the moment. I will add to this if I think of any other notable ones.

I asked my friend to find those bottles.

I also asked her to bring some 鮭フレーク for my onigiri's. I tried putting some 食べるラー油 in my onigiri last week and although it didn't taste bad, it soaked all the way through the rice. Doh!

Quote:
For onigiri you should try this one;

Have yet to try it, but supposedly it does a good job of not soaking through.

Oh i love them. I don't know what brand I had before but I always put it on everything

but when I found a really nice kimchi store nearby, I switched to Kimchi