Its good to be back, and in this time I would like to share some of my thought about differences between Japanese grammar and English grammar when I learn Japanese. Of course this is my personal opinion so it is open for debate. Have fun! 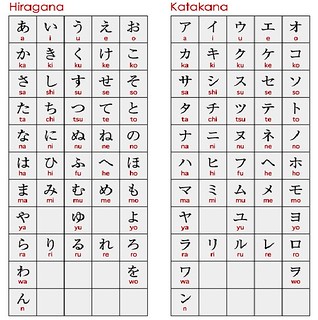 You have just read about Japanese characters and you are still afraid of learning Japanese? Then here is a good news for you. Unlike English grammar which has tons of verb tenses, ranging from past tense to the future tense and each tense has 4 forms: simple, progressive, perfect, and perfect progressive; Japanese grammar only has 2 verb tenses: past and present tense and each tense has formal and informal form. That's it! 2 tenses, in details, verbs in Japanese has "masu" ending. In present tense, the positive form will be "masu", negative form will be "masen"; and in past tense, the positive form changes to "mashita" and negative form changes to "masendeshita". On the other hand, the formal and informal aspect are quite easy to get. Therefore there is nothing to worry about in term of Japanese grammar's verb tense. 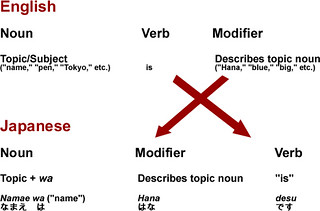 So normally in English grammar we follow this order: Subject - Verb - Object, for example: "I eat rice." But in Japanese grammar, the order is little bit different which is: Subject - Object - Verb. Sounds weird isn't it? If we follow this order in English, the example above will be: "I rice eat." Sounds nonsensical and funny, but actually that is how it works in Japanese. In Japanese, the sentence "I eat rice" will become "わたしはごはんを食べます" (watashi wa gohan wo tabemasu - I rice eat). This difference is not that complicated as you gradually learn Japanese. However, it means that during your Japanese learning process, especially if you are beginners and if you are learning speaking Japanese, you cannot just translate whatever sentence you see into English since the two particles orders are different. Not to mention that there is high chance that you will be confused between the two language structure, and that will not be good.

Overall personally I find it hard to compare these 2 languages since people from different countries may not think the same. But yeah for me Japanese is truly a hard language and it needs hard work.
Last edited by Arsudar : 09-19-2016 at 08:02 AM.

Most significant grammatical difference between Japanese and western language is - I think - western grammar is positional and Japanese is not.

I mean Japanese has the "marker" for every word to indicate the class of the word and you do not consider severely about the position in the sentence with these markers.

I have no time to continue writing. see you later!

After ten months of gap, I decided to continue this thread.

I started learning English at age of twelve in school. At age 15, I was surprised at a English phrase "(to) live a life".

I'm not sure if western people understand what I found then, the first thing I was shocked was the aggressive stance against the life. I think most of Japanese people would rather think of life as "to be allowed to live". This concept would be based on Buddhism and leads Japanese people to accept HARAKIRI or KAMIKAZE kind of things.

The second thing I was surprised at was grammatical subject that "live" is the transitive verb.

Japanese language also has transitive verb but Japanese people do not concern about it so often.

When Japanese students learn English, they are told "English has a structure of S-V-C where number of C could be zero to two".

It is very difficult for me to write about Japanese grammar in English. Anyway, I will continue explain what I think.

bject)" while sentences in Japanese language has not always such kind of confrontation.

I have an impression that English is a language where "I" or "you" and other thing are confronting while Japanese language treats everything even.

When I translate some Japanese sentences, the first thing I do is construct a confrontation. Without this step, I cannot make the elemental structure of English.

If I translate Japanese sentences word to word without confrontation, foreign people would ask me "then what is the point?"

Do you understand what I want to say? I'm not sure I could express what I think correctly. I will re-write again and again later on.

Then, on what Japanese language is based?

I believe western S-V-O can not fit the Japanese Language.

Why do I believe that? Because of the Japanese word marker "が：GA".

WA and MO are not always indicate subject. WA is main theme indicator and MO is "also" for every marker.

How do you learn about themarker "GA"? Did you learn it as the subject marker?

In this case, "GA" indicates the dog is the subject.

In this case, "GA" indicates the "dogs" is the object.

in this cace, there are two way of interpretation. they are confusing.

I can not explain the "GA"s in these cases. Can someone explain for me?

Comparing English and Japanese in some cases in the daily life. English comment starts at 4:00.

In English, all the people use "I" to indicate oneself.

Then, Kings, thieves, innocent little girls call themselves as "I".

It is their culture to use just "I" without adding any other meaning.

In Japanese, we have many ways to indicate oneself to express the stance against the listener.

"WATASHI" is most standard form to indicate oneself without adding no information not rude and not too polite. Male/ female and young/agedm, all type of person can use this. I recommend Japanese learner to use "WATASHI" for "I" when you visit Japan.

"ATASHI" is used by girls sometimes unconsciously used instead of "WATASHI". When a girl uses "ATASHI" on purpose, she is a kind of dangerous girl.

"ATAI" is also shortened form of "WATASHI" and used by girls who are dangerous and sometimes painful. Do not try to be friend with a girl who call herself "ATAI".

"BOKU" is used mostly by very young people or children expressing "I'm not at higher position than you".

"ORE" is used only by adult male. It is kind of rude word and he express implicitly "I do not mind if I'm rude or not". With very close friend, Japanese males will use "ORE" each other. The relation of "ORE TO OMAE:I and you" is a sign of close friends.

"WASHI" is usually used by old men expressing "respect me".